we are the brothers ( artistes) ISMAIL,  JASON AND SALAM , our ambition is that 20 % of the imports of our paintings to be paid for people in need ( refugees , displaced people homeless ....  )
we are happy that the last this initiative allowed us to
buy winter clothes for some orphaned chilidren .
also helped some poor displaced families,some women who've suffered from war ....

As war started as thousands of refugees , we had to leave our country with our family in order to safe our souls .. In a journey of seeking for peace .. After the difficulty of reaching Greek land , only few days , then we heard the border is closed and the journey is gonna be longer , then it was the time of spending one year in tents "refugee camp " ... As we used to paint little in Iraq , our passion of painting became more when we saw how much is important to reach sound of those who doesn't have sound.
We were lucky to be supported by great friends (volunteers ) that they supported us with providing painting stuffs for us .. That we could do something ..avoiding stress and try to transfer massages of thousands of refugees ,, and specially what happened and still happening with my Yazidi people .. Who faced 74 genocides along the history in the Middle East .. The last one was in 2014 when ISIS ( Islamic state ) killed 5000 of my people and kidnapped nearly 5000 women ,girls and children .. The last genocide is still raging on to this day ...
more bellow in links of some articles about us

Most of my paintings are from acrylic and oil, participated in some exhibitions and events. Exhibited  some paintings that had been organised by NGO  ( I AM YOU ) held in: Amsterdam, Barcelona , Mallorca  and new York in December 2016  .
Exhibited  8 paintings  on 25, 26 November 2017 as the .bees> in saint Nazair  France .

Exhibited  8 paintings in the festival of migration in freyming merlibach  France on 8th  April 2018 .
Exhibited  5 paintings in  Opera theatre  in  Metz City on 4th August 2018 .
On August 3, 2018, I participated in two paintings commemorating the Yezidi genocide in  Germany,  Giesse city.
Exhibited 14 paintings in city hall of Forbach city on the 13th August till 31th August.

Salam Noh ,
Student at 4th grade of university of duhok
Arabic department ..
I started painting for the first time in 2016 when we were in Greece as refugees, to express our suffering and day life challenges as well delivering the messages of our Yazidi people and refugees all around the world , after six months of painting I made an individual exhibition in Zurich Switzerland, on 25/4/2016, there were 18 paintings, and then I did my second exhibition in Barcelona, Spain, on 20,12,2017, and there were 12 paintings, then I made two exhibitiona in Netherlands, the first on December 2017, the second on may 2018, as well as an exhibition in England, my last exhibition was in France on 7/6/2018, I have also participated in many exhibitions, including Greece and America, "Washington "And England, and in many countries in Europe ... I've painted about 70 paintings of different
sizes of oil and acrylic so far
Exhibited 14 paintings in city hall of Forbach city on the 13th August till 31th August. 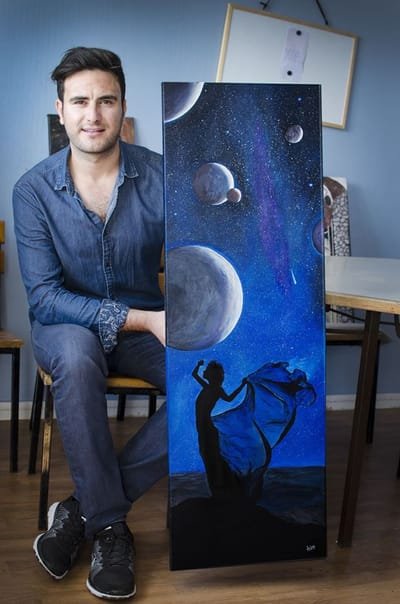 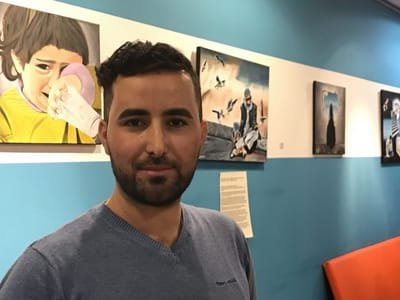 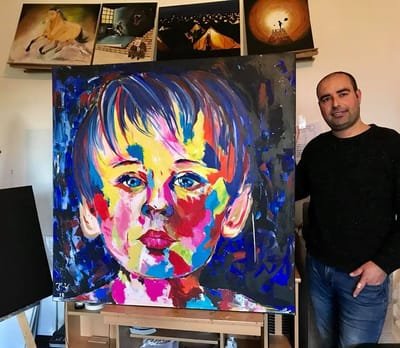